After 12 weeks of triathlon training with Aneta, we could improve 4:30min her sprint distance personal best time in Olsztyn triathlon on 27th May (time of same course + all races).

At week 12, during sprint-distance, her bike performance was 3min faster than last year’s PB. (same course/nearly same condition).
Her swim was worst than before in Olsztyn triathlon. The reason was, we started to build her swim technique instead of working on her swim time. She didn’t have any intense swim until week 10. The focus was on bike-run. And finally, her PB sprint distance tri time improved 4:30min even without a good swim performance.

Aneta never missed a workout. The difference between wanting and achieving is discipline. You can’t achieve any goals without discipline. The work we’re doing is paying off. 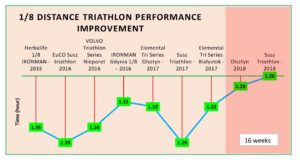